Only tool available is MRT as i'm doing this by remote but i did encounter MAJOR problems attempting to do this recovery and I'm stuck.

A donnor drive is available of the exact same model and firmware. PCBs are directly compatible and ROM code is the same.

- Connecting the BAD drive does get MRT to stay "stuck" in BSY. Drive doesn't apear to be loading the ATA overlay. So i placed the known good donor on the MRT to "detect" the firmware details and then when MRT does load the utility (creating a loader from the donor is possible) we swap (NOT HOT SWAP) to the damaged drive without closing the utility so that MRT are "aware" of the correct location of the firmware. 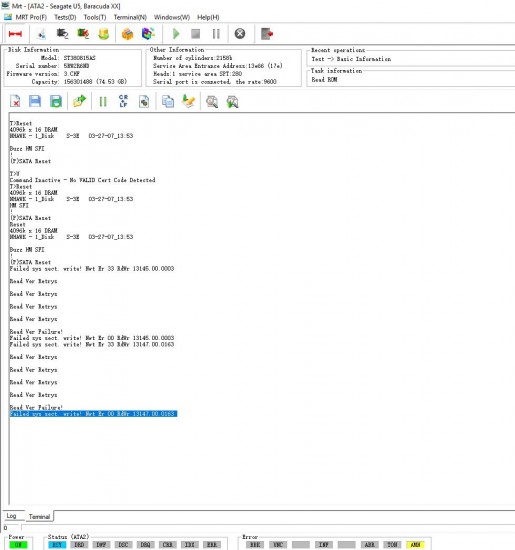 - The BAD drive reach T> level so we know that adaptives + SA defects + APP code is loaded and then the drive is stuck on BSY with errors.

- Not only something is not correct with ATA overlay but we also get those errors whena ttempting to write to the firmware at drive power up. Those are created by the drive and NOT by MRT. Maybe tehy are S.M.A.R.T. related as it's impossible to re-set S.M.A.R.T. as well.

I do suspect S.M.A.R.T. damage and ATA overlay damage (bad sectors on SA).

It's possible to read ALL SA components and create a loader with DONOR : 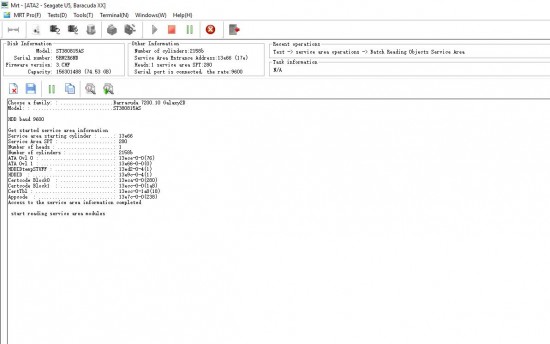 But it's impossible to load that loader on patient !!!
Spildit

Here we have more details :

- I can't WRITE the ATA overlay from the good drive back to the damaged drive even by HOT swap. By HOT SWAP the "track" does apear to write but the content written is not correct as it can't be read later. 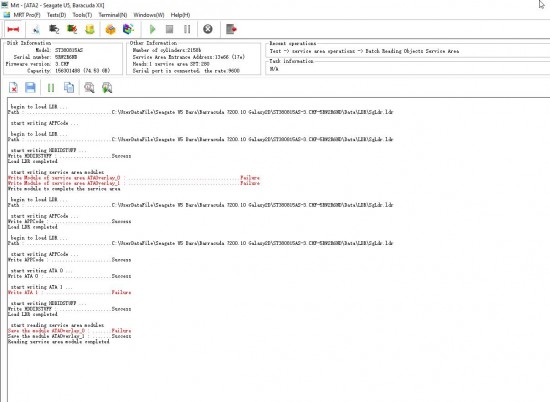 - It's possible to drop the drive to safe mode ( F> ) and then load components with R and start app with j . drive does go to T>. 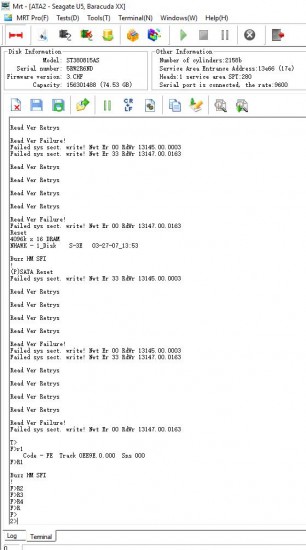 - It's not possible to read the ATA overlay on the PATIENT. It's possible to READ it from the DONOR but impossible to WRITE it to the patient as well even by hot swap : 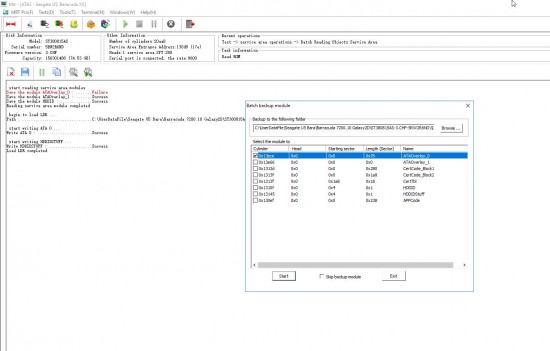 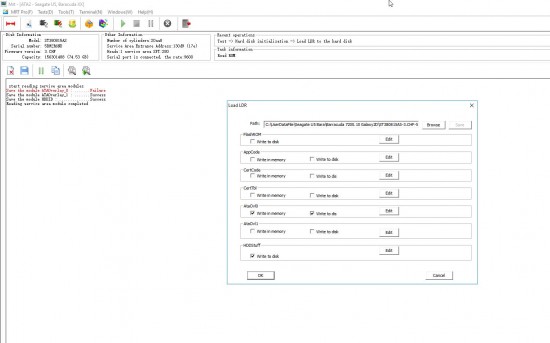 - Clearing S.M.A.R.T. does fail as well even if drive is started by HOT SWAP : 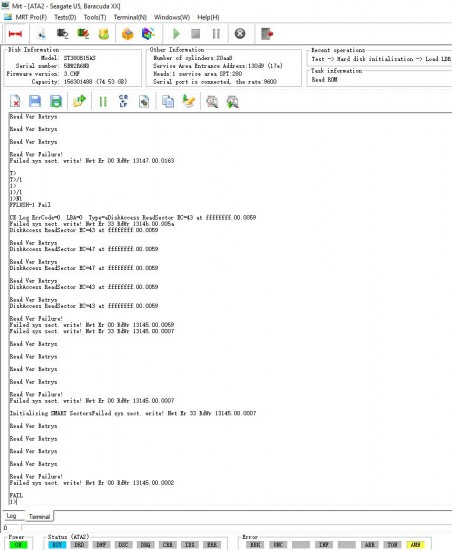 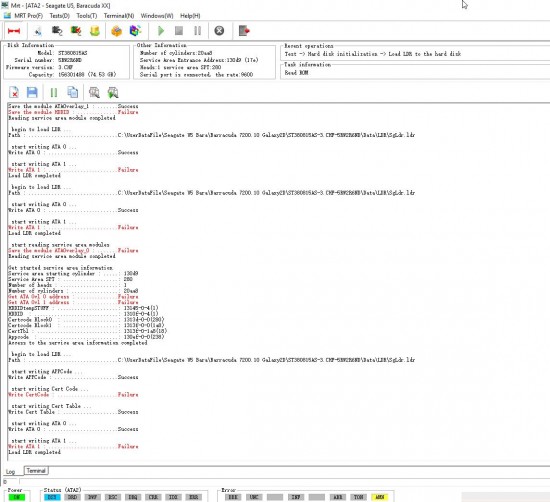 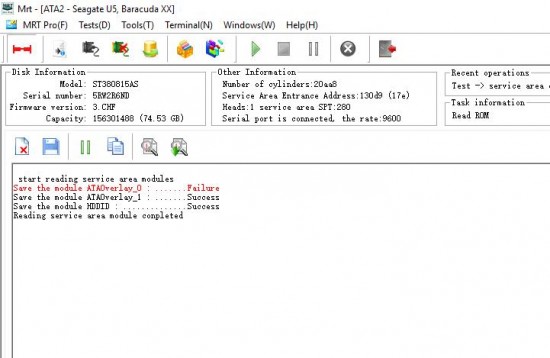 HOW CAN I RECOVER THE DATA on this drive with MRT ONLY ???

- On MRT on the other hand I CAN'T FIND any function to do the same (load the drive from loader on DE).

- I've read many posts about MRT not handling correctly old ST-10 drives, maybe there is a problem and the ATA overlay can't be loaded because of MRT bug ? At least on families like Venus MRT can't read overlays and have huge problems, maybe it's the same with this 7200.10 ?

- I don't know why a good ATA overlay can't be loaded from loader on the good drive.

- Also there are some threads that talk about MRT not making their loaders as their should and because of that MRT can work with PC-3000 loaders but have trouble with their own loaders ....

Just with MRT is it possible to solve this case and somehow load from the loader and make he drive DRDY / DSC for imaging in DE ?

I can't WRITE to tracks most likely because of bad blocks so i would like to load to RAM the components of the good drive so that the bad drive would boot up in a way that i could clone/image it on DE ...

Maybe someone with experience with MRT can comment on how to make this work ? 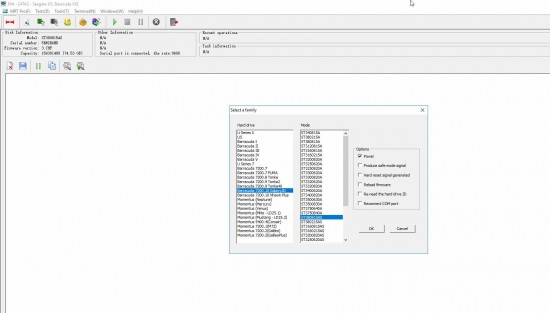 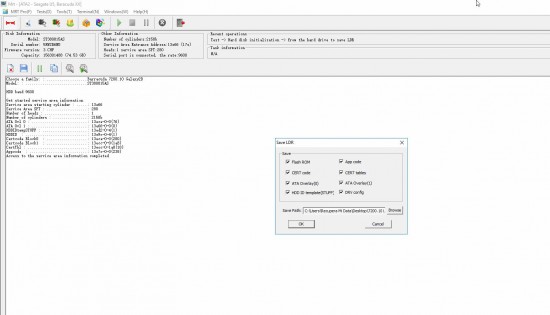 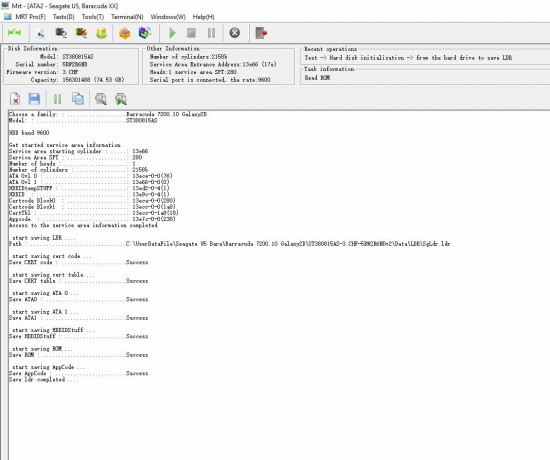 Now i drop the drive to safe mode (F>) and load APP code and ATA overlay but the drive remains in BSY : 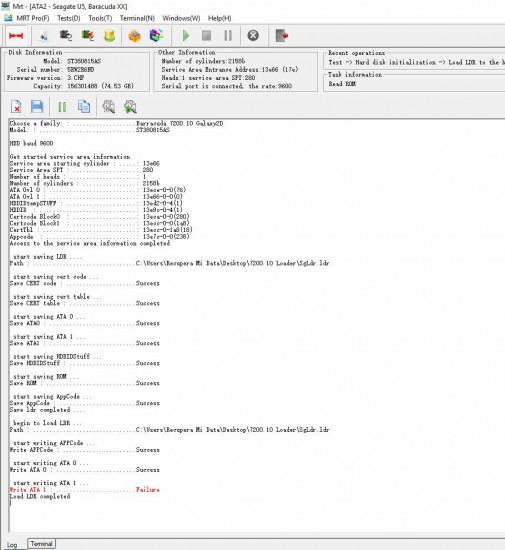 How do you guys shitch for terminal to ATA on MRT without re-setting the firmware ?

Thanks for the tip.

I was doing this over TeamViewer with a "friend" but things are not looking good with that MRT.

I will ask for the "client" to ship the drives to me. Should be fairly easy to do with HRT.

I can easly copy by terminal the tracks containing adaptives, defect lists, etc using HRT but on MRT I'm really stuck. I'm not even sure this thing is loading the ATA properly..... I think it's buggy and it's not working as it should. Also i've read somewhere else that MRT does have big problems with those older ST-10 drives and on some families like Venus, etc can't even properly backup SA ...

I will ask for the drives to be shipped to my location and then i will try your method. Looks very viable.

Thanks once again for the tip.
michael chiklis

MRT is junk for working on this drives
Spildit

michael chiklis wrote:MRT is junk for working on this drives

Doesn't work on MRT, I did try only APP and ATA and it doesn't work as well ...

The case must be very profitable, U5 series not frequently seen on the market these days
Spildit

Alikhan wrote:The case must be very profitable, U5 series not frequently seen on the market these days

Depends on the country. It's just that F3 will fail WAY MORE so older ST-10 either did fail already many years ago or are still running fine ! lololol

For the record my main machine where i do have my firmware tools and HRT card installed have the OS and main utilities installed on a 2008 ST-10 (Seagate 7200.10). I did run a full scan of the drive on the first day of the year and it doesn't have a single bad sector neither a single slow access sector and the G-List is empty .... Those drives were made to last, unlike F3 ARCH junk ....
Post a reply
Switch to full style