DR-Kiev wrote:There is a great chance it is spindel stuck issue

If pcb works good, in case of spindle stuck, should i be able to listen a bip sound with a hear next to the drive?

Could it be that a stuck spindle is the reason that the motor controller failed?
labtech

The techs at the IT company it went to first took the drives out and tested them. They said they were not spinning as well, but not sure if that happened naturally within the external enclosure itself or maybe it was a mess up during testing.
No visual physical signs of any burns on the PCBs.
Some brief preliminary voltage testing checked out fine. Nothing apparent being suspicious.

Good donor drives we ordered spun right up without issues in case a PUIS or anything weird was configured on them.
Replaced PCBs on each drive with ROM swap and got the patient drives working again.
https://www.datarecoveryguru.com/blog/2 ... ard-drives
fzabkar

DATARECOVERY GURU wrote:Well, for starters, both of these NASWare ready model hard drives strangely sustained electronic failures. Upon testing each HDD at the time for file recovery, neither drive was spinning when powering on.

With that in mind, parts were ordered to repair the PCB on each hard disk drive, as well as sourcing an entirely new WD casing.

Was a new enclosure really necessary? Did you test the original bridge PCB?

DATARECOVERY GURU wrote:The next step in the data recovery process was to inspect the SMART attributes on each drive using advanced data recovery software.

There is no need for "advanced" software. Just about any freeware SMART tool will do this.

DATARECOVERY GURU wrote:Finally, the data recovery process from this external drive went as expected, mounting the Mac volume on a MacBook Pro, access the 7.1TB worth of files and extract them out to a brand new Seagate USB external drive.

This type of file recovery requires advanced data recovery software and hardware knowledge and tools, including a substantial investment of over $600 in parts alone.

So you mounted the customer's data on a Mac OS, and then copied the files to an external drive? Where did the "advanced" software and "advanced" hardware knowledge and "advanced" tools come into the picture?

ISTM that this was potentially a very simple DIY job.
labtech

Frank, many times you waste your time criticizing things and facts when it is unnecessary.

ISTM that this was potentially a very simple DIY job.
Maybe to you theoretically speaking, given the more technical background. For the average people, even techs, in reality, not so much, as far as the plan and logistics to recover it and the costs involved.

Was a new enclosure really necessary? Did you test the original bridge PCB?
Maybe not, but for $50, it would make sense to buy a new working one compared to the time disassembling the old failed one (potentially ruining the chance of WD accepting the device for warranty replacement) and trying to find the needle in the haystack. These 8TB Helium drives in new condition are over $500 a piece. A customer is likely expected to be quite frustrated to have a $1000+ invested in a device that cannot be replaced by the manufacturer. Many times, it is better to work smarter, efficiently and with the customer's best interest at heart, rather than trying to be MacGyver for no reason.

"Advanced software" compared to the average person/computer shop/IT folks, who use basic tools "to do stuff", hence unsuccessful nor provide the desired results when trying to recover anything. It is witnessed every day when inquiring about "So what happened with this device? What does it do? What kind of tests did you run?", etc.

Here is an example of advanced hardware/software in ensuring the job is done correctly that the average repair/recovery techs don't have: EEPROM Programmer.
michael chiklis

I will receive donor pcb soon.
At the moment it's located in Milan, i'll let you know if pcb + rom swap will work.
Thank you. 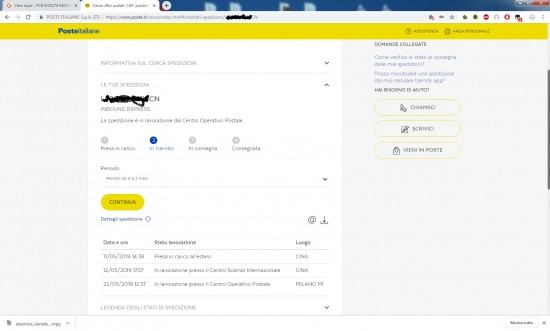 labtech wrote:Frank, many times you waste your time criticizing things and facts when it is unnecessary.

AFAICT, you took a simple job (2 x PCB swaps + 2 x ROM transfers) and beat it up with irrelevant references to advanced data recovery tools. AIUI, no advanced tool is yet able to deal with WD/HGST helium models, at least not at the firmware level. Moreover, it would appear that you departed from the standard procedure of cloning the drives and then decrypting the clones, presumably because no advanced data recovery tool can do this. Am I correct?

And yes, I did reread your blog, and it still conveys the impression that advanced data recovery tools are necessary when they are not.

labtech wrote:Frank, many times you waste your time criticizing things and facts when it is unnecessary.

Moreover, it would appear that you departed from the standard procedure of cloning the drives and then decrypting the clones, presumably because no advanced data recovery tool can do this. Am I correct?

You are right, did not clone each drive, because it did not make sense to in this particular case. Taking too long, more resources and more money (which customers simply do not want to pay). Since it is an encrypted RAID0 with healthy drives scenario, it made more sense to clone out the entire decrypted logical drive.

Correct, I am not aware of any tool that can put together correctly an encrypted RAID0 from WD enclosure and decrypt the data by working with individual drives/images. So, advanced thinking is necessary. Otherwise, any Jo Mo could do it. But they cannot. 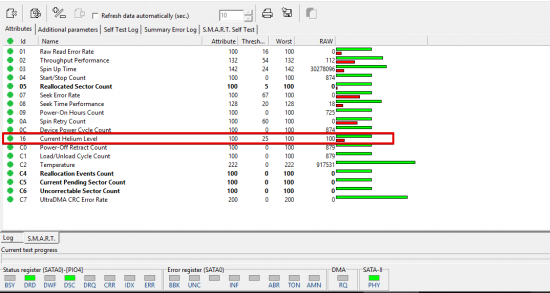 Thanks for the PC3K SMART screenshot. I prefer CrystalDiskInfo because it defaults to hexadecimal raw data. As they stand, some PC3K SMART attributes (eg temperature and spin-up time) are unintelligible until they are converted to hex.
michael chiklis

I did backup patient ROM

I received donor pcb and swapped the rom.
Now the hard drive spins but it does beep sounds, very likely heads are damaged but it could be something else as helium that is vanishing, some sort of faulty on donor pcb... maybe?
I don't know nothing for sure, this is my first helium drive and all we don't know much how this type of drives behavies.

I want to remind you all that original pcb seem to be fine at the begin (DRD + DSC flags were on and i could misure voltages on motor chip) but motor didn't spin, now with donor pcb it spins but heads are producing beep sounds (i think this could be another kind of pcb issue).
I was thinking to swap motor chip from donor to patient pcb... i don't know if is a good idea.

DR-Kiev wrote:There is a great chance it is spindel stuck issue

If pcb works good, in case of spindle stuck, should i be able to listen a bip sound with a hear next to the drive?

Could it be that a stuck spindle is the reason that the motor controller failed?

Based on the beeping behavior, I am inclined now to think that spindle being stuck somehow may be the issue, as well.
michael chiklis

I don't think spindle is stuck, i can hear clearly platters turning and vibrations.
I think most likely is head damage or something releated to helium deficiency.
fzabkar

Is the motor controller hot to touch?

Do you think that the VCM is being driven? You can measure the voltage across the VCM current sense resistor (R22D).
fzabkar

FWIW, I have extracted the ROM components and tested their checksums. There are big gaps in my understanding, and my terminology is probably incorrect, but I can't see any problem (as is to be expected).

Wait a second!!!
I was going to measure voltages on R22D as fzabkar suggested, when i've seen two capacitors that were missing.

This is what we get when we buy from untrested sellers on ebay, spildit warned me.
You were right spildit after all!

Now is very late here in italy, but tomorrow i will try to swap those 2 capacitors from patient pcb to donor and i'll let you know if something changes. 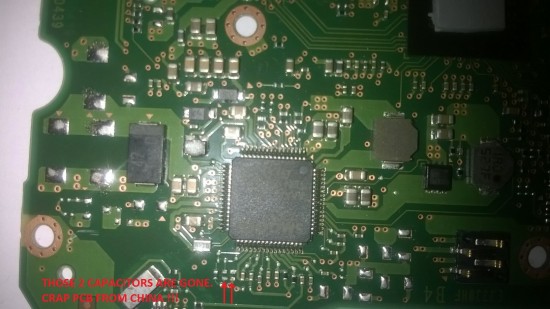 You might like to examine the motor terminals with an oscilloscope, if you have one.
michael chiklis

Ok, i've soldered those two capacitors below the motor chip and now seem that drive is spinning properly, listen to audio file

I've attached the hard drive to sata port of my 64bit Win7 OS, now it is identified in device management but only after "drivers installation" message, which takes about 1 minute since i power on hdd.

I don't know if is normal that it takes so long.

MRT doesn't support this drive, even for surface scan or simple smart checking.
HD Tune is too "stupid" to show the smart properly, crystaldisk is better but isn't able to show thesholds, Victoria is better because is able to show helium level which HD Tune and Crystal can't. 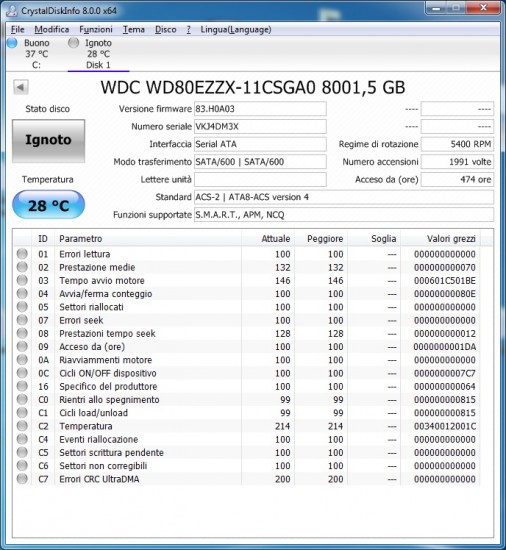 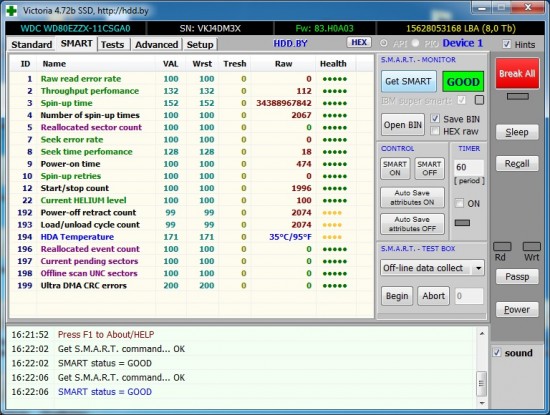 Standing on what Victoria smart is showing, the drive seem to be fine but i haven't found yet a tool which is able to show me sectors on UA.
MRT ---> failed
R-Studio ---> failed
WinHex ---> failed
Victoria ---> failed

I don't know yet if is normal behaving like that when this encrypted type of hdd are attached direcly to sata port, the drive came here with his WD enclosure attached to sata/usb controller which has ASM1151W mcu.
Probably after i'll remount the drive to his usb controller i will be able to access to data, but first i've to find out if controller and power supply are ok. I don't want donor pcb get killed.
fzabkar

The ATA command for reporting SMART thresholds was rendered obsolete many years ago, but HDD manufacturers have continued to support it. I wonder if PC3K and Victoria now retrieve the threshold data some other way. Perhaps the thresholds are included with the main attribute data.

Could you show us CrystalDiskInfo's hexadecimal text dumps of the SMART data? There should be an option to display a hex dump of the output of the SMART Read Data and SMART Read Thresholds commands.

BTW, I'm relieved that I didn't cause you grief with that dodgy replacement PCB. Nice job.
fzabkar

michael chiklis wrote:Standing on what Victoria smart is showing, the drive seem to be fine but i haven't found yet a tool which is able to show me sectors on UA.

I don't know yet if is normal behaving like that when this encrypted type of hdd are attached direcly to sata port, the drive came here with his WD enclosure attached to sata/usb controller which has ASM1151W mcu.

AIUI, you couldn't clone the drive (without the bridge PCB) even if you wanted to. :o

ISTM that one may be able to exploit these enclosures by using a SATA protocol analyser to examine the SATA traffic for VSCs. This may then lead to a "solution" for this new firmware architecture.
labtech

Michael, what model WD enclosure is it, please? Link from manufacturer with picture would be best.
Post a reply
Switch to full style