Hi all and thanks for reading. In 2010 I bought two Seagate Barracuda 2Tb drives both are the same model (ST2000DM001) but have different firmware.

The drives were both fine until about 2013 when after a power cut one of the drives could not be picked up by the BIOS or in Windows but still was spinning up. 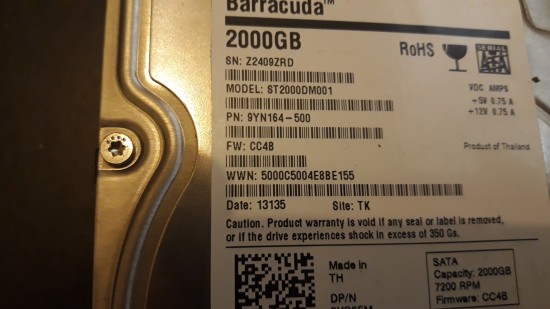 At this point both of the drives were pulled from the case and stored away and the PC was no longer been used.

In the past few weeks I have cleaned out that computer and got it running again (P4 2.6Ghz 1Gb RAM on Win XP pro)

The first drive that failed was plugged in and is still trying to spin up but still will not be detected by BIOS or windows or disk management however I did see it briefly appear in device manager but it was showing a load of strange symbols instead of the model number. 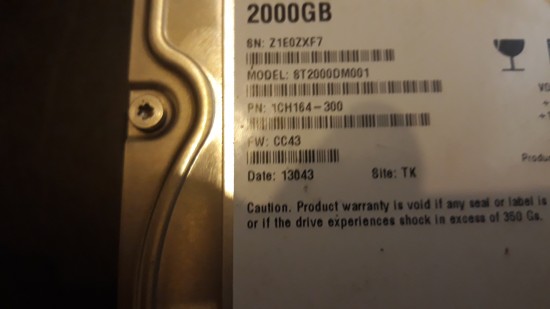 After a couple of days the PC froze and no surprise the other Seagate drive was the culprit as it would no longer be detected by the BIOS but this one however is showing in device manager and seatools with the correct model number although seatools is reporting the wrong capacity.

I'm not holding out much hope with these two but it would be nice to recover the data from the first drive that failed as it was the only copy.

Ive bought an RSS232 TTL adapter and wiring loom that I am yet to try as Im unsure which wires go to which pins on the adapter and the drives themselves.

Any input as to how to proceed with this issue would be much appreciated as I would like to try what i can as regards DIY but would also consider pro DR dependant on cost.

If data on the drive is important, then stop doing any thing. At this point recovery could still be not so expensive.
Get a free quote first, if data is not worth the price, you can try any DIY tricks after that.

Contact pcimage.co.uk located in Peterborough, name here in the forum is pcimage
Impulsion

Thanks I'll give them a try, The data on the first drive is encrypted as a TrueCrypt volume,Do you know if this would this cause any issues when it comes to recovery please?
pcimage

Impulsion wrote:Thanks I'll give them a try, The data on the first drive is encrypted as a TrueCrypt volume,Do you know if this would this cause any issues when it comes to recovery please?