Introduction
Since WD Mypassport HDDs have a strict encrypting and decrypting system, there is little possibility that data recovery can be performed if the user has forgot the password. In this situation, the function of “Tools -> Retrieve user password of encrypted USB HDD” in WD utility can be used to retrieve the password, which makes it possible to do data recovery.

Theory:
This function sets guessed parameters based on users’ fuzzy remembrance and the program will automatically guess the users’ password.(shown as pic 1)

3. Both the HDD first sector and EDEK can be obtained from the HDD. However, the first sector we want to obtain is the original data which has not been decrypted. Only in this way, can we get the correct data of the specified character when the program is decrypting. Therefore, the program reads the data from the COM port when it loads data from the HDD. And it requires a good connection of the COM port when we load data from HDD first sector and EDEK. Fortunately, MRT lab has developed a WD USB-to-COM transfer card, “MRT WD-USB”. Anyone who needs it can contact MRT lab.
We can also use the way of changing USB board to SATA board to obtain the data and then save the file. Then when using the function, users can select to load from file. Comparatively, this way is more complex.

Multi-machine and multi-task settings:
If only one machine is needed and no special requirements, choose settings by default. 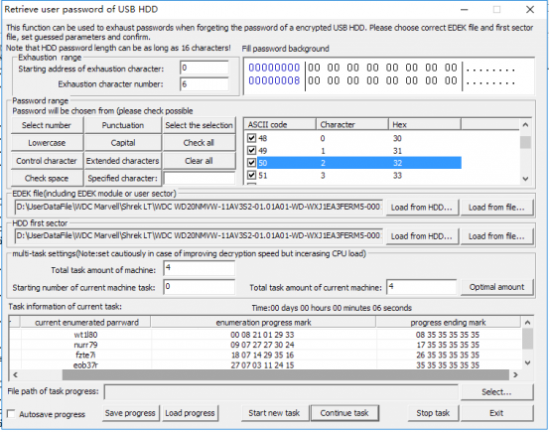