First all of, let's get a general understanding of SMART. SMART is short for "self-Monitoring, Analysis and Reporting Technology". It is one automatic status detection and early warning system and specification supported by modern disks. It can monitor the power-on hours, temperature, internal circuit, dielectric material on platter etc., as well as record the running log of disk in order to find out the possible problems of disk and send warning in advance to prevent from losing data. However, due to the constantly updated ATA standards, the threshold, the attribute value and maximum error value may be different among different models.

Now let's focus on the manifestations and judgement methods of SMART modules damage:

1. Hard disk can not be ready after powered on, it stays busy. This manifestation is similar to the situation when translator is broken. But the locations of these two malfunctions are different, so we need to distinguish them. 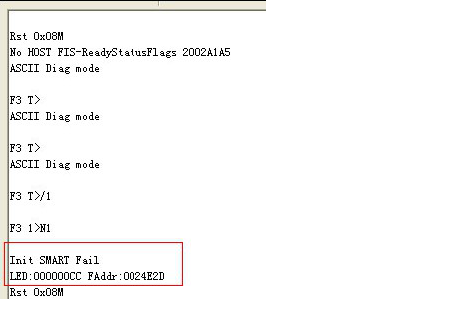 For the first manifestation, if we can exclude the possible reason of damaged translator, usually we can know the problem is associated with SMART modules. There will be two different situations when SMART modules are broken: the first one is that tracks where SMART modules located are with logical errors, and this situation we will explain later; the second one is that there are too many recorded entries, resulting in an overflow. For this second situation, actually the SMART tracks are all good, the wrong thing is the content within SMART modules, but this will also lead to a long busy problem of the disk. The solution for this situation is to clear SMART, then clear A-list and recalculate the translator, and this method is the so-called Seagate three steps .

In general, "Init SMART Fail" error is due to logical errors in SMART tracks. In our previous software versions, we can use "Track reading test" to deal with the problem. However, since version 2.0.1.2 of Seagate F3 Architecture, we have added one patch function in ROM tools which can fix "Init SMART fail" problem. This function is very powerful, it can modify ROM data and let disk skip the reading of SMART tracks, so it can recalculate translator successfully without "Init SMART Fail" error.

Detailed steps of how to use MRT "init SMART Fail" patch function are as following:

Open MRT software and enter into Seagate F3 Architecture, click "Tools->Firmware area object viewer->ROM tools", we can see there are four ways to read out the ROM in the pop-up dialog box, they are ATA, BootCode, System file and Load from file. We know that "Init SMART Fail" usually comes along with long busy problem, so we would like to recommend to use BootCode method to read the ROM out, and the baud rate is recommended to set to 460800. 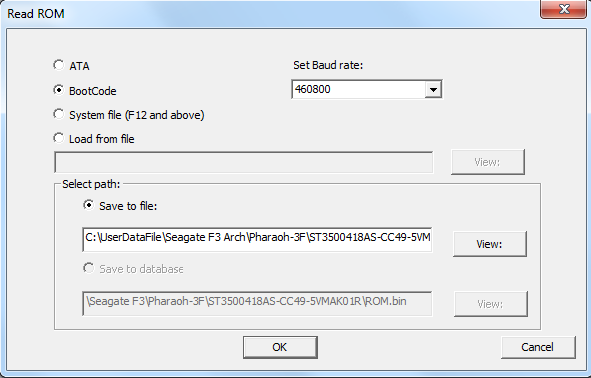 Once the ROM has been successfully read out, we click the icon of patch tool, and we can see there is one option named "SMART fail". It only needs one click on this option, then "Init SMART Fail" problem will be easily resolved. We need to save the patched ROM, and write this new ROM to disk via Boot mode tool. 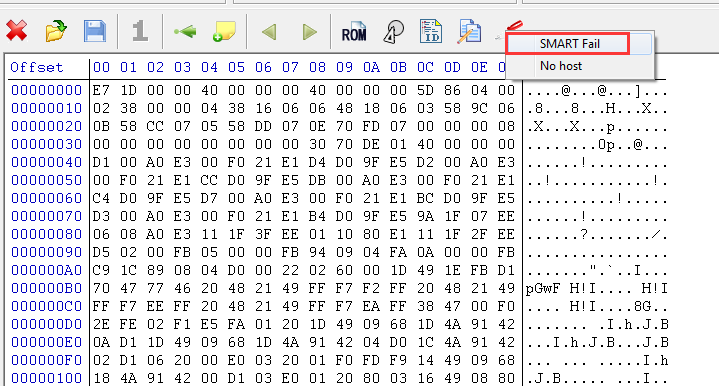 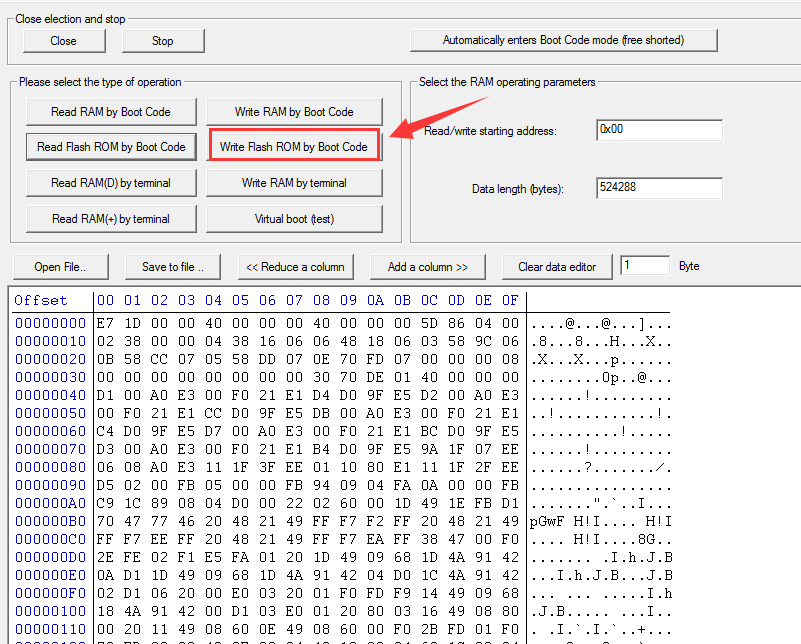 But sometimes when using this function, it might pop up a notice of "Not support this ROM yet". 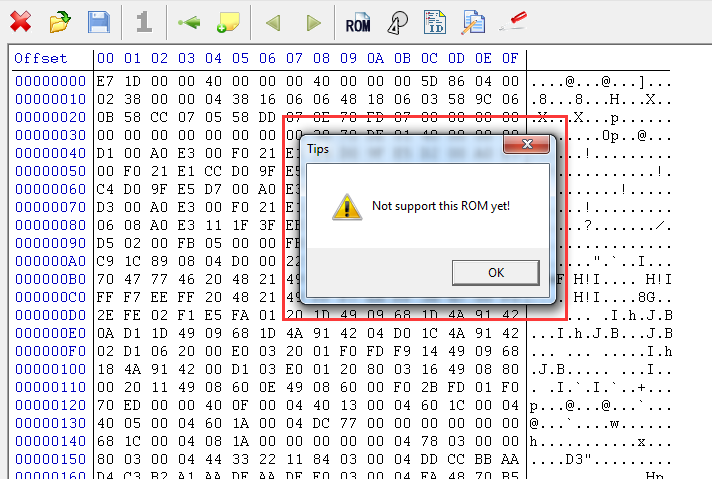 Detailed steps of how to use MRT "Track reading test" function:

1. Open MRT software and enter into Seagate F3 Architecture, click "Terminal->Serial port binary mode", or click the icon of "Serial binary mode" in rightmost part of the software interface. As shown in the picture: 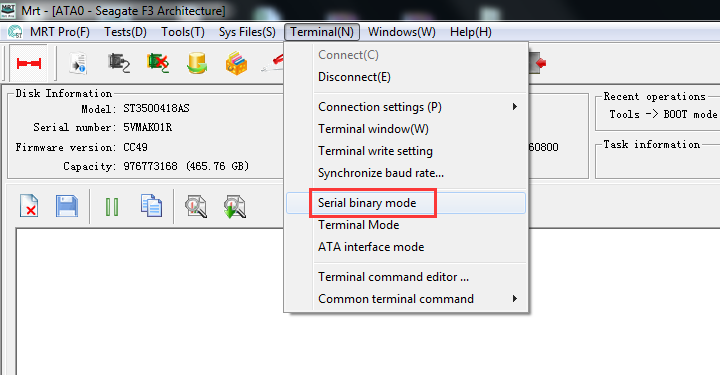 2. Click "Tools->Backup and restore tracks->Read SA tracks" to open the track reading page. If the user hasn't created working folder, there will pop up the dialog box of "New folder". As shown in the picture: 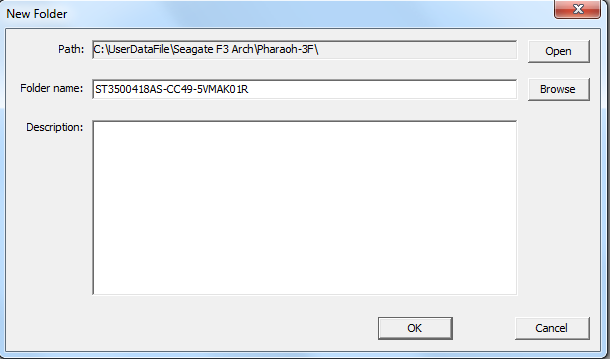 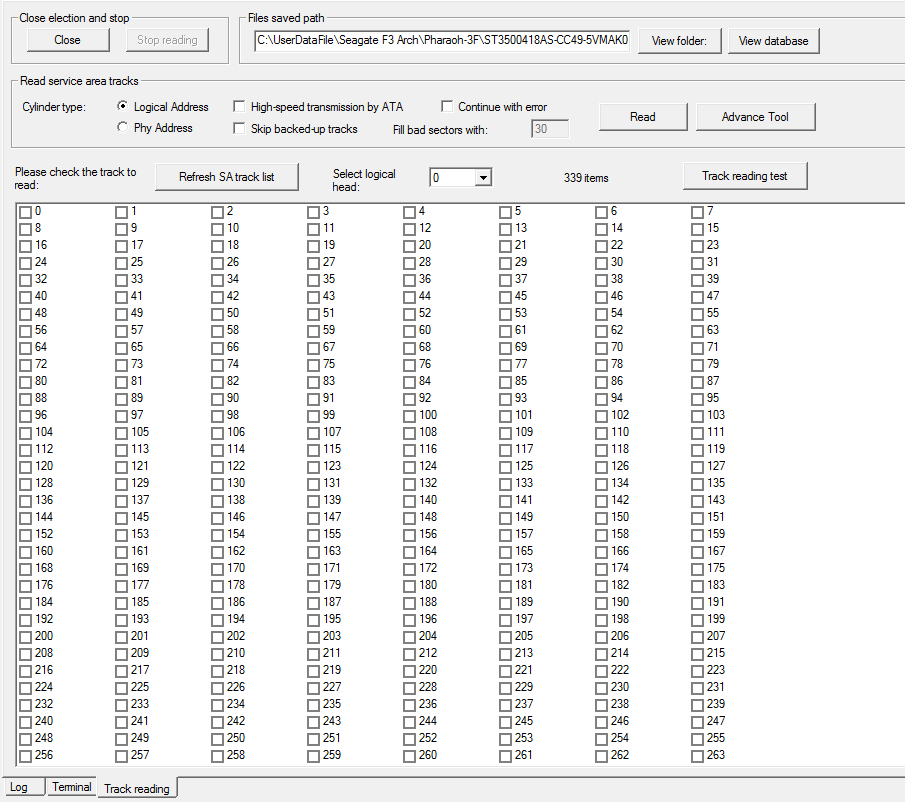 There will list all the SA tracks of this disk in track reading page. Please noted that all the tracks mentioned here are SA tracks. Users can select specified head in the list of "Select logical head", in this way, users can check the track list within each head.

Generally, the needed firmwares run with Copy0, which are located within head 0, so we need to select head 0. Right click the track list and "Select all" so that all the SA tracks of head 0 will be selected. Then click "Track reading test". As shown in the picture: 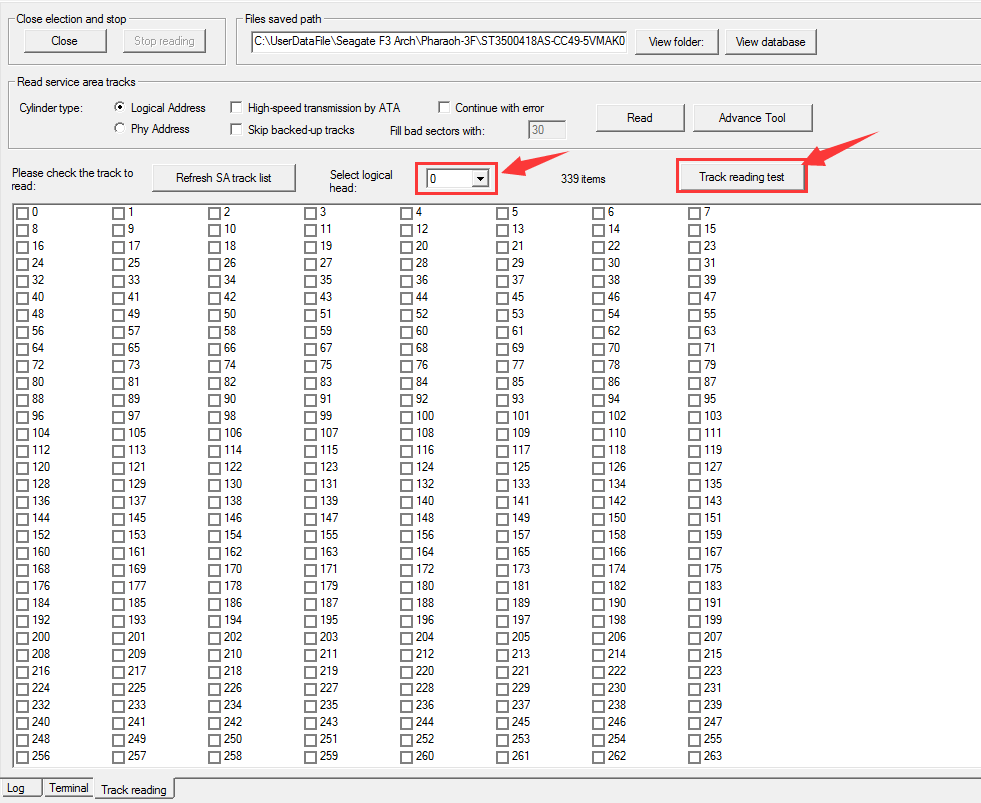 This step is commonly used to test SA. The purpose of it is to test whether there are unreadable damaged tracks and will list them out. The test result will be shown in the log interface.

3. MRT starts to do reading test for selected SA tracks. The unreadable tracks will be shown in red characters. Please noted that SMART modules of Seagate generation 12 usually locate at number 22 to 24 SA tracks of head 0. And the located SA tracks are different among different models, so we need to confirm the needed SA tracks according to the specified model. We can see the reading of these tracks are all failed. It can indicate the damage of SMART tracks. As shown in the picture: 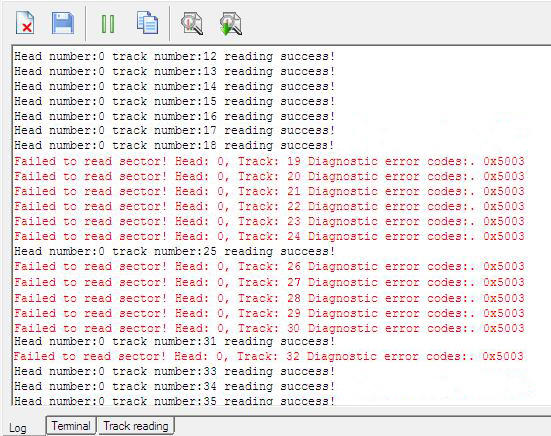 In the above test, we can see that apart from number 22 to 24 tracks where SMART modules located, nearby tracks are also damaged. We need to repair those tracks. Please noted that SMART tracks are the most important parts, and they must be repaired. While the repair of other tracks is optional as there is no critical data in them.

4. Set the baud rate as 460800 then go to track reading page. Select number 22 to 24 tracks (other damaged tracks are optional), then click "Continue with error", last click "Read", as shown in the picture:

As those tracks needing to be read are damaged in some extent, so we need to click the option "Continue with error". At that time MRT will force to read these tracks and try to read out the data to the largest extent. The read-out tracks data will be stored as files in working folder. And bad blocks in the tracks will be filled with "!".

5. After the track reading is done, the data will be stored as files in working folder, and what we need to do is to re-write them to tracks. During the re-writing process, the disk will automatically recalculate the ECC checksum of each sector. When the damaged tracks are being re-written, usually they will come back to normal.

Click "Tools -> Backup and restore tracks -> Write SA tracks", and track-writing page will pop up. There will list the previously read-out track data files on the bottom of this page. All these files are named in the format of "Track number_head number.trk". Select all the files and click "Write" to re-write those damaged tracks. As shown in the picture:

Note: If the disk can not be ready, SATA interface won't work. So we can not select "ATA high-speed transmission" as the transmission mode. But for Seagate generation 12 or later new models, they can support "Serial high-speed transmission" and we would like to recommend to click this option to enhance the writing speed. What's more, we recommend to click "Continue with error", because the program will force to write, and the repairing effect will be much better.

6. Wait till to track writing is completed. Once it is done, there will report the result on log interface, as shown in the picture:

All tracks were successfully written when there is no error reported.

7. When the writing is done, we need to turn to track reading page again, click those re-written tracks in track list and click "Track reading test" to re-test those tracks. And this time we can see that those unreadable tracks can be read normally now, which means the success of this repairing. The pic of report in log interface is below: 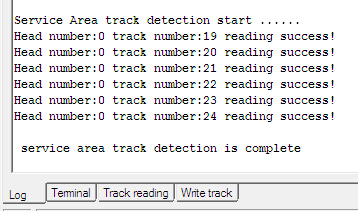 The above all are the contents of how to analyze and solve "Init SMART Fail" problem, thanks for your reading.

Hi,
Nice Post ,Keep it Up We Need More
Spildit

Thanks for sharing !
Amarbir[CDR-Labs]

Well,
Now you know this do not start experimenting with free tools and release a free solution for this too you sir have been doing this since long and if my memory serves me correct everytime you learn something new
Spildit

Well,
Now you know this do not start experimenting with free tools and release a free solution for this too you sir have been doing this since long and if my memory serves me correct everytime you learn something new